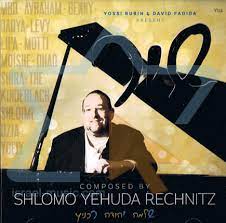 As I sometimes imagine Jews building new settlements among the Arab towns, I wonder to myself, “Are those structures safe enough? Aren’t they scared living within a few hundred feet of the Arabs? Is one security guard enough?” This Posuk tells us that we are mere pawns. If the Aibeshter doesn’t build the house, it’s useless. Just as useless as the security guard, for we can only rely on Hashem’s Shmira. The second Posuk reminds us that we have nothing to worry about, for the Aibeshter is always watching.

I remember when Benny Friedman made one of his first debuts, as his uncle Avrohom Fried introduced him to the audience at one of our Purim Mesibos. Thank you Benny. I shep nachas as I watch every month bring you more die hard fans, who appreciate your special voice.